Home » WHICH IS BETTER: WHOLE FOODS OR SUPPLEMENTS? 
HealthHealth & Fitness 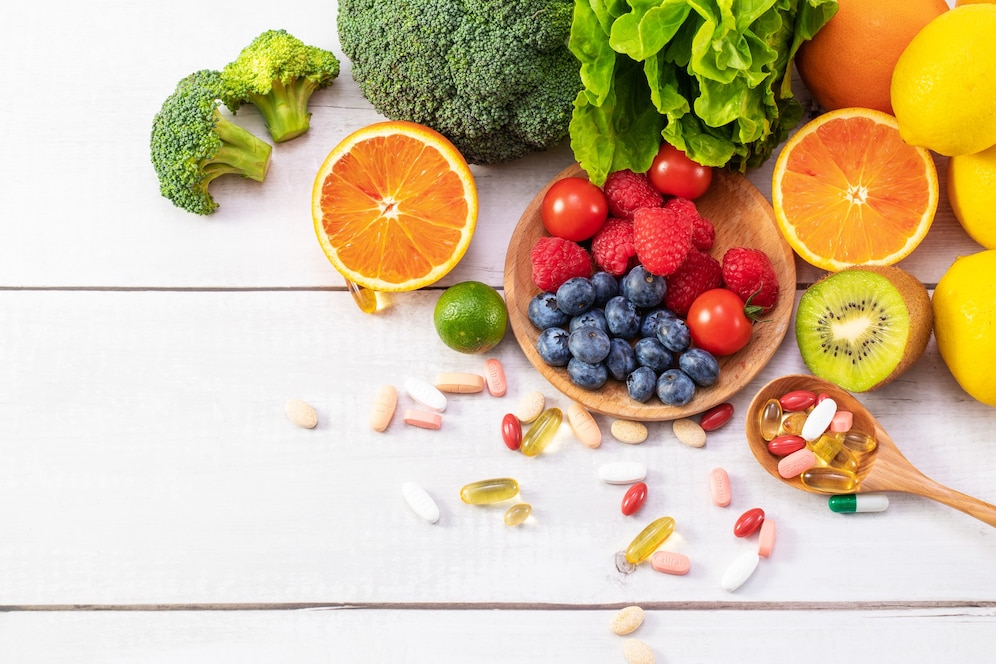 There is a strong argument to be made for the consumption of vitamins and supplements as a means for getting the nutrients into your body that you might be lacking in the kinds of foods you eat, or how your body processes them. But is there a point to which substituting these minerals you find in natural foods to a tablet version, actually detrimental to your body? Healthline poses the question like this: Synthetic vs Natural Nutrients: Does It Matter?

At a base level, we can assume that replacing most-to-all of our natural foods with a vitamin substitute is not adequate for a healthy lifestyle. We cannot replace our meat and three veg with a small plateful of pills and expect the same effects. So then should vitamins and supplements be taken in addition to a well-rounded diet?

Supplements are designed to copy the way natural nutrients act in our bodies. They are made artificially, and usually taken in the form of a pill, capsule, tablet, or even in the form of powder or liquid. As the production process of an artificially created vitamin is different to the way the same minerals it is made up is produced naturally. Your body will process and even react to them differently. This is largely because the nutrients you eat from plants or animals are made up of a more complex collection of vitamins, minerals and enzymes. That actually assist in helping your body make optimal use of them. As their synthetic copies have been very specifically and individually selected. They are unlikely to be used by the body in the same way.

The absorption of the nutrients is very important to the holistic functioning of the body. How well the body is able to absorb synthetic vitamins and minerals is hard to determine, and may vary from supplement to supplement. Natural foods have also been linked to managing and preventing major diseases. Such as heart disease, strokes, cancer and diabetes, among others. This is something that vitamins and supplements have not yet been credited with the ability to do. However, synthetically created equivalents can have a higher degree of bioavailability to their consumer.

That is, the nutrient is made more readily available to the body to use for its designated purpose. Natural foods will tend to need to be converted into another form in order to be used by the body for the most optimal results. The potency of the nutrients will also be higher in supplement form. As it is a concentrated dosage, as opposed to the amount sourced by natural foods.

At this stage, the evidence seems to point to the irreplaceable benefits of the nutrients found in whole foods in their absorption efficacy and ability to stave off chronic diseases. Although supplements have their benefits in terms of potency and bioavailability. The evidence is still not clear on how effectively they are able to absorb within our bloodstream. And whether or not they have the same profound effect on our health in terms of warding off major diseases.

There is also a lot of evidence that supports the significant impact of our dietary choices in warding off diseases. Sometimes even terminal cases. Cancers have disappeared alongside a drastic transformation in diet; involving cutting out all processed foods. And replacing them with whole foods. There are many arguments that have been made for the correlation between diet and autoimmune diseases also. With evidence suggesting that many have developed in people who have poorer diets. As the means to the presence of the disease. A significant dietary overhaul has also seen many autoimmune diseases dissipate accordingly.

Although the association between clean eating and optimal health is a very clear one. The cases in which diseases such as cancer and autoimmune diseases have been cured have been because of rigorous and militant levels of strictness. It is a discipline that is objectively worth it, but very hard to maintain.

The goal of working to decrease the severity of autoimmune diseases (or get rid of them altogether) is in eliminating the foods that cause inflammation within your body. These foods can differ for everybody, and require constant evaluation alongside a team of specialists. At minimum most likely a nutritionist and endocrinologist.

Most of these elimination diets work around eliminating foods that are not only processed. But also things like nuts, grains, eggs, nightshades (tomatoes and eggplants, for example), seeds, legumes and dairy.

A lot of those foods can be related to a leaky gut, worsening the condition by increasing the gut’s permeability. Foods that tend not to be inflammatory on a leaky gut include fish, some fruits and vegetables, and olive oil. Although common sense would dictate the truth of the following statement, the main goal is to eliminate the processed foods. Similar to a Paleo diet, otherwise known as the ‘caveman’ diet. The food you eat should be as natural and untouched as possible, from the place of its origin to the arrival on your plate. Just as the cavemen would have eaten it.

Many have to take a staggered approach to an elimination diet, to work out exactly what foods are reactive within their bodies and causing inflammation. To deduct a large number of foods at once would be a pointless exercise. This is where the close integration of your medical team is imperative to the success of your dietary process. Even if the disease cannot be defeated, the combination of diet, lifestyle and the right medication should see you feeling leaps and bounds better than you have previously.

Vitamins and supplements have never had the same ability to cure diseases. So in this case the debate between the two is near non-existent. They do not have the same capacity for holistic health that whole foods do. The thing is, though, that they do not claim to. Without substantial evidence of this, it would be highly illegal and unethical for them to do this. Companies of supplements speak to their proven benefits. Which include maintenance and general improvement in function for the areas it is targeted toward.

How do you Resolve the Linksys Extender Red Light Problem?

What To Expect At A Beauty Parlour?

Bodybuilding – Everything you need to know

The Top 5 Reasons to Visit the Lourdes...

Associated Clinic Of Psychology and How It Can...

3 Common Symptoms of Infertility in Men &...

10 responsibilities for virtual helpers in the healthcare...

The Very Best Massage Chair For Your Money

5 Reasons Why the Better Health Channel Is...

How to Find the Perfect Planet Fitness Personal...

2022 Best Platforms for Manga or Comics Lover
by Uneeb Khan August 26, 2022
How to Get Cheap Flight Reservations: Only The Smartest People Know The Secret
by Uneeb Khan May 14, 2022
Create an Inviting Living Room With Scandinavian Style
by MarketMillion February 22, 2022