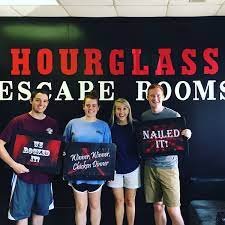 Escape rooms games are now popular all around the world. Escape Room or break out games are group adventure games where the players are voluntarily locked inside a room, and they will only be able to escape if they successfully solve the room puzzles. They must complete the mission under sixty minutes. The players will have to use their critical and analytical skills to solve the puzzles and crack the riddles. They will also have to accomplish other tasks that are assigned according to the room scenario.

Fantasy themed escape rooms are gaining more traction these days along with horror and detective scenarios. Fantasy escape rooms bring you settings like gothic castles, dungeons, enchanted forests, and similar locations. The inclusion of magics and spells also bring a new perspective to the game.

1. Once Upon an Escape, Las Vegas

7 dwarves, Arabian night, Rumpelstiltskin, and such well known fairy tales. The storylines and solid and the décor perfectly fit the themes. The realistic artifacts and interesting puzzles, make the games all the more entertaining. The brand is committed to providing an immersive and realistic escape room experience. All games are to be played in 60 minutes and the players have to be at least 14 years of age.

Daydream Adventure brings you the only art installation escape room in Toronto. The scenario of the Dream Portal escape room is that a mysterious meteorite has struck danforth and it has opened up portals to different worlds. The dream portal leads to the Enchanted forest which is under a curse put on by the witch Hilda. The players must unravel the curse to free the forest spirits. The game is kids friendly and meant to be played by 3 to 7 people under 60 minutes.

Questerland, Prague offers a Harry potter themed escape room called Magic School Escape Game. The scenario is the “He who must not be named” hid three artifacts inside the ancient school of wizardry. Only one student and his friends were capable enough to defeat the evil wizard. Since then, the teachers have used the secret rooms and artifacts to recreate the past situation. The platers are students who must pass this final test. A maximum of 6 people can play this game and the time limit I 60 minutes.

The Escape Hunt branch in Birmingham has the coolest Doctor Who themed original escape room-Worlds Collide. The scenario is that in a futuristic world, billionaire Alastair Montague of Chronoscorp has developed a commercial time travel trick. This has caused a tear in space and time. The cybermen are ready to attack Earth. The players are Doctor Who’s friends who must investigate Montague’s death to find his time machine prototype and make use of his research to save Earth. The game is to be played by a maximum of 6 people and the time limit is 60 minutes.

The Gangnam branch of Zero World Escape Rooms provide a lot of fantasy themed escape rooms. There are horror the

emed rooms titled, Ring, Forest, and Zero Hotel L Caller. There is a special fantasy themed escape room called One Winter Night 2. There is also a SF or science fiction themed escape rom called The Butterfly Effect. All the rooms have décor that fits the theme and immersive puzzles that draw you on. The time limit is 75 minutes here and a maximum of 6 people can play in these rooms.

Escape Room Games are really popular these days. They are perfect as a refreshing and unique recreational activity. The activity also provides an exciting outlet for our fanciful thinking. It is even more convenient now that they are also available on virtual platforms.

So, no matter where you are, escape experiences are highly accessible and affordable for most

people. Try out some of the games mentioned above if you are a fantasy-lover and you won’t be able to resist escape games anymore. That’s a guarantee!

Angular Vs React: Which One is Better for Your Web Development Project?

Got Stuck? Try These Tips For Streamlining Your SMALL BUSINESS